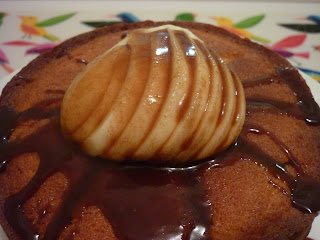 Back in the seventies, my sister and I used to sit down to a breakfast of puffed wheat every morning. If we were lucky, they were honey puffed wheats, served up with canned pears. Mum kept a lot of canned fruit in the cupboard, which seems odd now I think of it, because fresh fruit was plentiful, and not particularly expensive.

Those boxes of puffed wheat always came with a toy in them - a Dutch figurine, and I used to marvel, firstly at how many of them my sister got and I did not, but also at the unusual shaped hats and shoes the figurines wore. Of they were not shoes, they were clogs, something which I later learned my Aunt who spent six months travelling around Europe.

I used to make a lot of parfaits in the seventies, in which canned pears or canned peaches featured heavily. They were basically a single serve of trifle in a tall glass. They'd take all day to make because I'd set the jelly in the jar and couldn't add another layer until it not longer wobbled.

I never really took to fresh pears as a result of eating all those canned ones. But today when the unusually cold weather motivated me to make a pudding for dessert, I decided the pear in my fruit bowl would be the ideal fruity addition. Of course no pudding is ever complete without sauce of some kind. I chose carmel sauce for this one. The combination of caramel and pear is unbeatable.

1. Preheat the oven to 180 degrees celcius. Heavily grease a 7 inch round cake tin and set aside.
2. Combine the butter and sugar in the bowl of your Kitchenaid and beat on sixth gear until pale and fluffy.
3. Add the vanilla and eggs and beat add until combined. Ensure all the butter mixture is scraped off the sides of the bowl and fully incorporated.
4. Add the flour and buttermilk and beat on sixth gear for two minutes. Pour into the cake tin and smooth the top.
5. Cut the peel pear into eights and remove the core. arrange the pieces in a decorative pattern around the top of the cake.
6. Bake in the oven for 60 mins, or until cake is golden brown and form to the touch.
7. Carefully turn out of pan and cool on a rack top side up.

1. Place all ingredients in a small saucepan and stir while it comes to the boil.
2. Boil for one minute - no need to stir.
3. Set aside and allow to cool slightly. 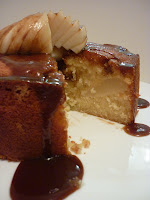 Assembly
1. If you have another pear, peel it and cut into 5mm slices, ensuring the pieces remain attached at the stem. Fan the pear out and arrange on the top of the cake.
2. Drizzle the caramel sauce over the pear and cake and serve. This pudding is nice with icecream too!

Note: the pears in the cake will sink - don't worry if this happens!
baking Birthdays caramel Desserts Pear

Popular posts from this blog 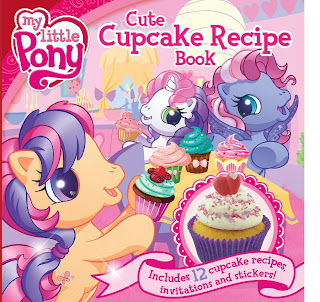 I am thrilled to announce I have finally published a book! It's not the long awaited Kitchen Alchemy book - it's something entirely different. I was very fortunate last year to be asked to design 12 cupcakes for the My Little Pony Cute Cupcake Book. My Little Pony is a world-wide phenomenon. The seven core ponies, Rainbow Dash, Toola Roola, Cheerilee, Pinkie Pie, Scootaloo, Star Song and Sweetie Belle have been creating fun and joy for little girls aged three to seven for over 25 years. So you can imagine I jumped at the chance to work with Hasbro and The Five Mile Press on this unique project. This month the My Little Pony Cute Cupcake Book is released in Australia through Scholastic Books. It features recipes and detailed decoration instructions for seven cupcakes based on the ponie, plus five extra cupcakes representing the world the ponies love to live in. It also comes with stickers and party invitation. I'm so excited to have been involved with the creation …
Read more 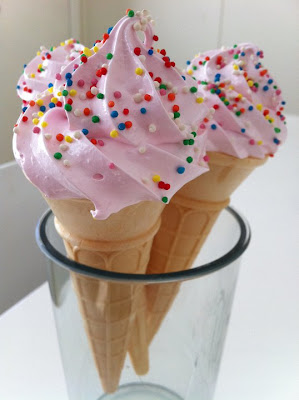 I have always been a big fan of sherbet in the many forms it comes in. As a kid, I loved those sherbet cones you bought from the corner store – semi solidified sherbet in a stale cone, with chewy marshmallow on the top, coated in hundreds and thousands. I also loved Wiz Fizz – fruity sherbet in a glassine bag with a little plastic shovel. I’d most often buy these on the way home from the pool, because they were only five cents. Unfortunately, my hands were usually still wet from the pool, turning the bag to a sloppy mess before I could eat its entire contents.

For my 10th birthday my mum decided to include homemade sherbet cones on the menu. Thanks to The Australian Women’s Weekly recipe cards, we had the recipe for sherbet and marshmallow, albeit, on different cards. My clever mum bought flat bottomed square cones, half filled them with sherbet and then topped them with pink or green marshmallow. Of course each had a liberal sprinkling of hundreds and thousands.

In my explorat…
Read more 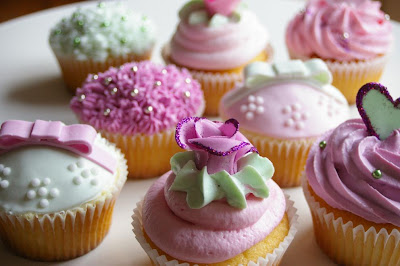 I don’t think there is an occasion more joyous than a wedding. Of course, once a wedding has taken place, many more joys follow, like the arrival of a long awaited baby. But it all starts with a wedding, and I find weddings to be chock-filled with hope.

If you’re lucky, you only ever need to have one wedding – although some people have more than one, if not several! So the trick to getting your fill of wedding joy is to know lots of people who are planning on getting married.

As a cake baker, I am getting to participate in weddings, baby showers, naming days and even funerals (although not too many of those, thank goodness)! I consider it a privilege to be invited to create cakes and cupcakes for these landmark occasions in people’s lives. We (my darling husband and I) always try extra hard to come up with something special that fits the occasion and the people who we’re baking for. And what we’ve discovered is trying extra hard allows us an opportunity for continuous improvement. When …
Read more

Petrina
It has been over 11 years since I began writing the Kitchen Alchemy blog. It began as a way for me to collect stories and recipes that I would include in a cook book. In the past six years, the cooking category in book sales has blown out of proportion - it seems people want to know how to cook everything and anything. This month I take one big step in my journey, with a book hitting the market about cupcakes - all recipes designed and photographed by me. Meanwhile, what about the Kitchen Alchemy cookbook? I have begun to piece it together. It will take time. But the dream is still alive.